Update 2017-01-02: I’m now updating FFB information over on my Secrets of iRacing post.

Update 2015-02-26: I’ve been changing up my FFB settings in iRacing lately after realizing that linear ffb resulted in such low force strengths (to avoid clipping) that I wasn’t really feeling the road anymore. The ffb changes were just too subtle. So, because I have a low-end wheel, a G27, I’m now using non-linear ffb and doing the usual binary-search to find the optimal force strength to avoid clipping. I’m doing this only because of my relatively low-end, entry-level G27. I expect the recommended usage for higher strength wheels (T500s/T300s, Fanatec ClubSports, Accuforce Pro, etc.) should still use linear ffb.

Update 2015-02-26 – 3: Nvidia users should check out these threads: iRacing graphic optimizations for NVIDIA users, Guide: nVidia iRacing Antialiasing (AA) Settings, NVIDIA SLI Compatibility results. The second guide about AA gives some good settings for Nvidia Inspector (I use in-game 4x AA with Nvidia Inspector AA – Mode “Enhance” and AA – Setting “8xS [Combined: 1×2 SS + 4 MS]”. Read the thread for what they mean). The third thread is about SLI and getting rid of microstuttering (I use Nvidia Inspector “SLI Compatibility Bits” = “0x00402015” per the thread). It’s not perfect but it’s better than in-game AA and should give higher performance.

I’m a big fan of iRacing sim racing and I frequent their forums quite a bit. I’ve seen a number of posts, over time, on the iRacing forums about people asking for the right force feedback settings for their wheels. As it turns out, this info in its complete form is harder to come by then you might think so I’ve decided to post everything I know and have implemented for my Logitech G27 for force feedback in iRacing…

David Tucker, staff at iRacing.com, worked on the Logitech G27 force feedback and he indicates they put a lot of effort into making the G27 “optimal” out of the box:

In addition to everything default in the profiler, in-game I use linear force feedback, which is supposedly technically more accurate feedback, a Min Force of 16.6% (this number is very close to every other G27’s calculated Min Force so it should work for you), Strength 32 (for a Mazda MX-5 Cup but it depends on the car, my Lotus 79 and Ruf use 20), and Damping 0% (because I want my feedback sharp not dulled). 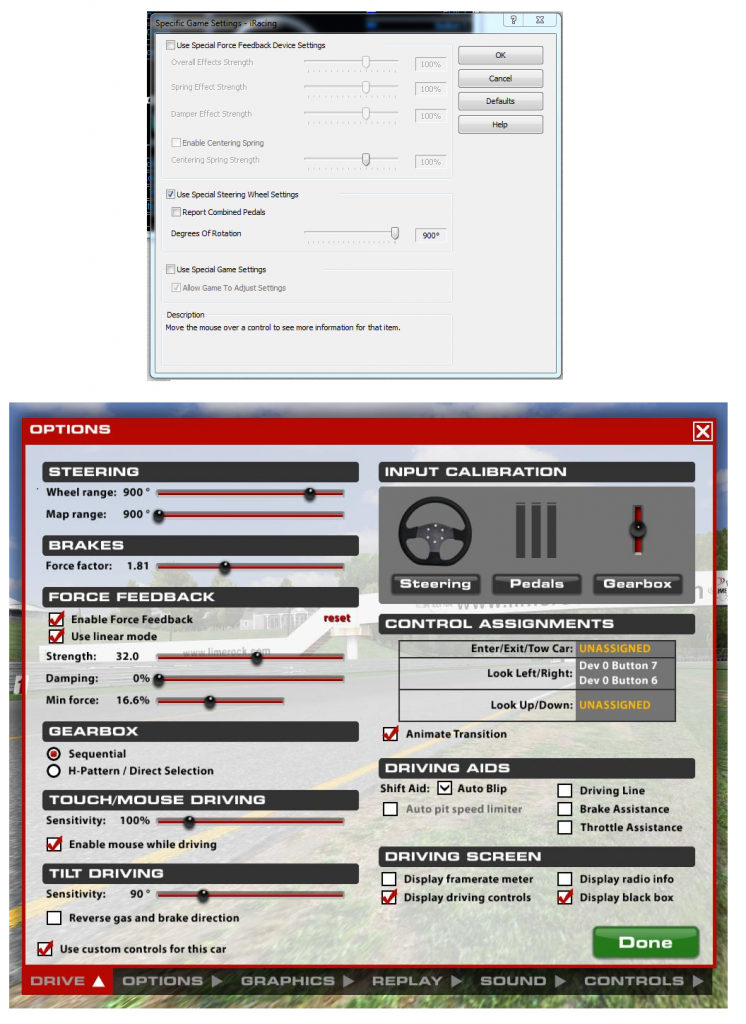 We’re almost done but there’s one more tiny thing we need to do that made a world of difference for my force feedback:

“I hate the chatter but I really wanted to feel the road and straights are the best indicator around the center to tell if you’re actually feeling everything.” -Matt

You should be able to find the app.ini file in your Documents folder under the iRacing folder. For example, my app.ini is here: C:\Users\Matt\Documents\iRacing\app.ini

A note on fine tuning strength in-game: Hit the F key while driving to get the force meter up. It’s the green/orange/red meter that’s always going up and down according to your wheel’s current strength output. To get optimal strength and detail out of your wheel start with a low strength and keep increasing it. You will notice your force meter hitting red more and more often as you drive – red means maximum output and it means the game wants to output more but your wheel can’t handle it (you’re losing feedback detail at this point which is not good, it’s called “clipping”). Keep increasing your force strength until the force meter only flashes red (clipping) for split seconds in your sharpest cornering. This will be your optimal force strength for your wheel.

PS. You might find my post on force feedback settings for Sector 3 Studio’s RaceRoom Racing Experience informative as well!

PPS. This thread over at the iRacing forums provides a good, detailed introduction to force feedback in iRacing.