Why do we espouse Young Earth Creation? Earth is a member of the total cosmos that God created. Would it not be more accurate to call it Young Cosmos Creation? Today, it is popular to think of Earth as a member of ‘the cosmos’. Secularist cosmologists even think of her as entirely the product of him. But not even the cosmological constants are sufficient; their fine-tuning for life is necessary, but not central. There must be an Earth.

I’m happy to introduce a paper by Daniel Pech, an enthusiastic creationist with lots of ideas, in which he proposes a reading of Genesis 1 that includes subtly more nuanced perspectives between the heavens and the earth while retaining a young-earth creationist perspective..

Daniel contacted me after reading my post concerning the complementary nature of Genesis 1 and 2 (as opposed to a self-contained and contradictory nature).

You might be interested in getting to know Daniel a little bit more. If that’s the case, head over to my post entitled Daniel Pech – Bio, Aspiring Creation Writer -Selah.ca Guest.

The first section below, The Best of Both Worlds, is a primer to Daniel’s main idea in his paper on a reading of Genesis that highlights what Daniel believes is a lack of reading the full ‘dimensionality’ of the text.

The second section is an excerpt to Daniel’s paper which more fully reveals his argument and direction.

I hope you enjoy the introduction and take a look at his full paper if you’re interested.

The Best of Both Worlds
by Daniel Pech

The best of both the physics and terrestrial readings conceivably can both be that meant by the author of the account.

Notice that the selfsame set of data comprising the above series of shapes can serve simultaneously to tell both halves of the whole basic story.

END_OF_DOCUMENT_TOKEN_TO_BE_REPLACED

I started working out this spring for the first time at my local Good Life and one of the first things I knew I wanted to do was to know when I could ramp up my sets and reps. I’m a big user of the Apple iPhone Reminders app so I figured I’d put it to good use recording my workout: 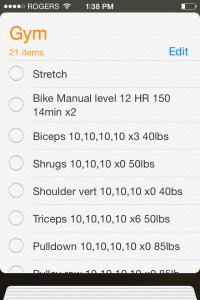 But why track your workout like this? Because working out is a long-term activity. Tracking your stats in a simple, easy way like this will help remind you where you’ve been, where you’ve gotten to, and provide a clear path of improvement so you’ll be on an upward workout trend and not plateaued or even going down (how would you know without tracking)? You’ll feel good about continuous improvement and more confident because you know where you’ve come from and where you’re going.  I think most people would find tracking their workout tedious on paper or they just don’t know what workout app to use, etc. So I figured I show how it can be done with an app that most people have already.

So, what you have above is a Gym tab in the Reminders app and I simply list all my exercises in the order that I do them. I also record any pertinent settings for the machine (like Level 12 and target heart rate 150 for the bicycle). Then I record the sets and reps (“10,10,10,10” – ie. 4 sets of 10 reps each). I record the workout count (“x4”) meaning how many times I’ve done it (usually indicates once per workout). I also record the weight.

See how compact and easy it is to review your current workout when you record it like that? And it’s in the Reminders app that I use for everything else so it’s easy and convenient to use.

For the record: I’m not a licensed gym trainer, physiotherapist or doctor. The ideas in this post are from my personal experience and I hope they can help some beginners as well.

Following I’ve included some personal thoughts, recommendations and anecdotes about my experience at the gym since I’ve started. I hope it helps someone out there get started as well!

END_OF_DOCUMENT_TOKEN_TO_BE_REPLACED

When I work from home I often listen to podcasts and I’ve been listening to CBC Radio Ideas’ After Atheism this week. This is what I’d call a post-post-modern look at religion and materialism over the past few thousand years. This is a compliment as they recognize things like the resurgence of spiritual interest, the myth of religious violence, the actual (not supposed) factors at play in the separation of church and state. They even recognize Christianity specifically has been behind many social change movements and demonstrably not just an ‘internal, private spirituality’ thing.

The episodes are long and in-depth but, for the first time in a long time, CBC is giving as fair a shake as can be expected to faith in general and, in places, to Christianity in particular.

It’s by no means pro-Christian but it’s decent place for open discussion.