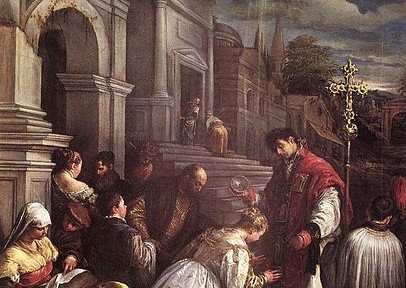 Oh, Saint, to your name, thereof,
My question is this, what is love?

On a warm summer’s day, sunshine beaming down on country fields, and in the vibrant spring of my life, many, many years ago now, I once spoke these fateful words to a certain girl I liked very much: I don’t know what love is. What precipitated this sad half-truth was a silly conversation, strewn with longing undertones and yearning unsaids. Half-truth, I call it, and still do, even from the moment the words slipped from my mouth. I knew I could love, I believed I had been doing it for some time, but with such an abstract term, complicated by our overuse, I still wondered at, and was haunted by, the question: What is love?

END_OF_DOCUMENT_TOKEN_TO_BE_REPLACED

So, the latest intra-Christian controversy to blow up is popular Christian worship act Gungor’s denial of the ‘literal’ reading of scripture, particularly Genesis, the creation account, Adam and Eve, and the Flood. This of course triggering the day before our traditional day of worship when Christians come together to worship God their saviour in spirit and truth. This, of course, all comes on the heels of the Tim Lambesis story who allegedly attempted to hire a hitman to murder his wife. It’s hard to try to move one’s heart towards God when we’re distracted by emotional issues like these. Here’s a few of the articles circulating:

END_OF_DOCUMENT_TOKEN_TO_BE_REPLACED

Fourteen days have passed since the day that never was, and I find myself here, in this unwanted moment, this day that never belonged, this February twenty-ninth.

I was running that day, full strength and head strong, hurtling towards the precipice, adrenaline fueled, fight or flight blinded, heart pumping, right off the edge

where I remain, here, in the painless agony of the nothingness, waiting for the drop,

But I remain. Still standing, over empty space. And no sign appears, either falling down above to save me, or rising up  below to skewer me. I am lost, though not without compass, or a promise, and these I clench fast where naught else remain within reach and naught else remain to bear me up.

Happy New Year! May your heart warm again to hope by the very sunshine shone forth only from the trust put in Jesus Christ, Saviour of your soul, God, Who knows the good plans He has for you!

Allow me to open 2012 with an old stand by, for the “old school Sanctus Real fans…”

Things were better last year. Things will be better this year.

Thank you, God, for blessing me, thank you for helping me be a blessing, thank you for changing me. You have shown your faithfulness in spite of my unfaithfulness. You have answered my prayers, you have carried me through, you have lead me and guided me according to your Will for me, revealing to me day by day your plans to bless me so incredibly. I am amazed that you care for the things that I care about. Forgive me for having such little faith. I believe, help my unbelief! Thank you for the sacrifice of Your Son on the cross for me, a sinner. May I ever more and ever better be Your servant.

The Lord, God, He is Good. Come, Lord Jesus, come.

Update 2015-05-16: I just came across a well-written post–“Invictus” Redeemed–about the poem and Dorothy Day’s response to it from many years ago. Day’s poem is a good read but the author writes quite well on why it is the original poem isn’t all that inspiring or reasonable when you get into the details.

Christus Invictus: Behind the Verse

In a previous post, I published a poem entitled Christus Invictus. That poem was based on and inspired by William Ernest Henley’s Invictus. Although the Wikipedia article doesn’t cover it, Henley’s Invictus was a “deathbed affirmation of his atheism” [author’s note: not literally, since he wrote it young when he was sick and lived many more years but true per his apparent convictions later in life]. I think most people know the poem even if they don’t know the author or remember the poem in its entirety.

I was piqued in the last two weeks by a Ravi Zacharias podcast mentioning the poem, used in contrast to his Christian message. It’s a good poem, well written, realistic, inspiring, even, but I knew the poem lifted man above God – and, as is my bent, I can not abide what I perceive as foolishness. Thus, Christus Invictus is my response to Henley’s Invictus attempting to show the vastly different perspective of one suffering, as Henley did, yet living with the hope of glory in the salvation of Jesus Christ.

I had a few goals in mind when revising his poem. The first was to respond in verse, speaking on the same themes, but from the perspective of salvation. That was a driving force. A second goal was to show how changing so very little of the poem could result in such a different attitude, pained yet joyful, humble yet victorious. Another goal was to avoid sugar-coating the Christian experience. God does not promise unending earthly happiness. In fact, He promises the opposite. Hence, the poem is left untouched in many areas to retain and openly admit the reality Henley experienced and wrote about.

Out of the night that covers me,
Black as the pit from pole to pole,
I thank, in Him, Jesus Christ
For my redeemed and purchased soul.

Henley had it right with “Out of the night that covers me, \ Black as the pit from pole to pole,” and so I left it as-is. There’s no use arguing against this Fallen world and that evil is afoot here.

Where Henley originally wrote, “I thank whatever gods may be \ For my unconquerable soul,” I knew this was disingenuous. There is a God and He has been saying the same thing to us for all history: Follow me. Just mentioning God, however, didn’t oppose all of the original intent. I needed to speak to Jesus Christ and His act on the cross that is salvation to every man, woman and child, each of us “our redeemed and purchased soul.”

Note the change from Henley’s “fell clutch” to “fell-hard clutch.” This is not an attempt to remove any of the original meaning but actually a poetic alteration to match the rhythm of the third line’s altered nine syllables.

Henley writes, “I have not winced nor cried aloud,” but he and I both know no human goes through this life without pain and sorrow. I simply admit as much. This line, too, was altered to match the third line’s altered rhythm.

I wanted to change Henley’s insinuation of random chance when he wrote “Under the bludgeonings of chance” and so altered the last word to “flagrance.” The truth is there is something going on in this world and there is more to the events that occur, to our circumstances, and to our choices, than simple random chance. This is the change that necessitated the “fell-hard” and “sore-winced” rewording in the first and second lines.

Sheer contrast is needed in the fourth line to provide force to the incredible difference of response one should expect from one saved from eternal death. Henley’s original, “My head is bloody, but unbowed,” needed a response that indicated an alternative to the natural reaction of men to the evils of this world. I did not want to diminish the reality of pain, however, and so “My head is bloody” remains.

Beyond this place of wrath and tears
Looms but the Horror of the Shade,
And yet the menace of the years
Finds and shall find me unafraid.

This verse is unique. There is absolutely no change to wording. I felt it was all accurate, fair and true. The observant reader will notice, though, that there is a single difference: The “S” in “Shade” has been capitalized where it was lowercase in the original. Where the original implies an insignificant nothingness, I wished to simply and subtly convey a terrifying somethingness, that which is the only thing left when one’s fate is not with God in the eternal.

It matters not how strait the gate,
How charged with punishments the scroll,
I am the master of my fate:
He is the captain of my soul.

Here, we come to Henley’s climactic verse of self-statement and self-direction. Most people know the last two lines of this verse even if they know nothing else about the context of those words.

And now Henley rings out at his strongest, his mightiest. His conclusion, affirmation and pronouncement: “I am the master of my fate: \ I am the captain of my soul.” And it is here that the strongest, mightiest contrast needs to be made.

I am the master of my fate:
He is the captain of my soul.

Christus Invictus is my response to Henley’s Invictus showing a Christian perspective on the same themes. I hoped to show the incredible difference of perspective of one who is going through suffering, as Henley did in his life, but who also lived with the hope of salvation in Jesus Christ.

I even had the thought that I was “sticking up for God” which is a childish thing to think for a Christian. The Almighty needs no champion but Himself; And He already came in the form of the Son, Jesus Christ, who hung on a cross for our sins, died, and rose again, and conquered everything.

Nevertheless, God is due His rightful honour and glory. As Joseph said, in Genesis 50:20, “you meant evil against me, but God meant it for good.” I make no claim that this is such a case. That God intended me to do this, I do not make the claim. As Henley is created in the image of God, however, I can see the good within his writing and so wish to see it redeemed, in the end, to the glory of God alone.

For God so loved the world that he gave his one and only Son, that whoever believes in him shall not perish but have eternal life. John 3:16