Enter Nim’s world this Christmas season and let his wintry world carry you to a land of northern lights, falling snow, playful gremlins, sleeping giants, chilly horses, and one innocent maiden who believes in good, still. Rest, and refresh, as Ola Schubert draws you into Nim’s magical land in his extravagantly hand-crafted and richly orchestrated tale, Nim’s Vintersaga.

Join Nim, this Christmas Eve, in his snowy, wintry tale, as he sweeps you away to a world of gremlin hooligans, giants slumbering, wolves slavering, and one little girl whose faith in good remains. Enjoy as Ola Schubert takes you to another place, a magical place, whimsically crafted and beautifully orchestrated, in Nim’s Vintersaga. 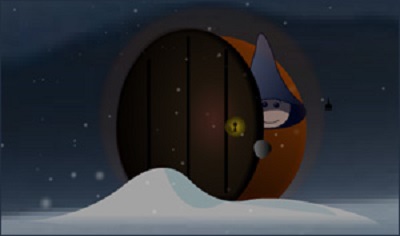 This Christmas Eve, join Nim as his snowy, wintry tale sweeps you away to a magical world of gremlins, sleeping giants, fearsome wolves, and one little maiden who still believes in good. Settle in as Ola Schubert transports you to Nim’s world, endearingly hand drawn and exquisitely orchestrated, in Nim’s Vintersaga.

Lower the lights this Christmas Eve, sit back, relax, and immerse yourself in the magical world of Nim in his Winter Tale, Ola Schubert’s loving creation, complemented by an equally mesmerizing soundtrack.

The hill was empty then. I stood just below the peak. Over one hurdle, and then over another. They had all left. And their challenge hung chill in the air.

The hill was empty then. I stood just below the peak. Over one hurdle, and then over another. They had all left. And their challenge hung chill in the air.

“Not possible,” they had said. That challenge. Echoing off every ice crystal hanging in the frozen air. Not possible! What foolish words to utter to a child. What was impossibility to a ten year old? It was simple! A hill. Two jumps. The first to the right, the second to the left. I can do this!

So I pushed off and attacked my challenge…

Slowly my pace quickened and soon I was screaming towards the first obstacle! Ack! A monster rearing its ugly face! Up! And over! Gliding through the air and! Thud! To the ground, turn to face my second foe, slip! Flip!

Into the the jagged ice, cold and miserable, but not convinced.

So I trudged back up the hill, caught my uncatchably cold breath, surveyed my task again, refined my strategy, and delivered…

In a few moments I was racing again over shrill snow! The monster rose up again! But I was ready for it! Swat to its snout! Up! In the air! The glorious air! CRACK! Back on the snow and this time holding tight to the turn, toward my second obstacle! Pounding hard to his beastly gaping maw! Blam! Higher and higher! Flying! Smashing to the ice! But an odd sensation! Shuttering! Toppling!

Face down in the bitter snow, cold and miserable, but not convinced.

Tired and exhausted, I scaled the hill again. Back to the top where I could see again the challenge I wanted desperately to meet. There I rested my battered body, caught my uncatchably cold breath, committed again to the challenge, and charged…

Quickly I was skating away with wind wooshing past my head! Again he appeared and again I hit him full force! With a heavy blow and endless soaring weightlessness! Gone too soon and smack! On the ground and upright and I hurtled again towards the final feat! That grotesque ugly thing! I slammed hard into it and launched into the air! A nothingness in the air for an eternity quickly finished! Smash! To the ground I hit with a slam! I’ve knocked myself silly! I’m still moving. I’m unsure of myself. I’m a little dazed. I’m still gliding…

I knew I could do it!

I think I told them, but I suspect no one now remembers the kid who stayed behind to answer their challenge, to do the impossible.

Many years have passed and this memory remains with me. This memory informs my steps even now. No longer a child, a man, and I have seen many challenges, but none quite like that hill and none like its power over me. But this time my challenge is different.

This time my challenge is you – my impossible. For you rest upon a peak I can not climb, and you stand across a chasm I can not bridge. There is no path I may scale nor have I device to take me over.

No. You are my impossible, at a time and in a place where a child’s ferocious imagination and untainted belief in possibilities can no longer shape desire into reality.

It’s impossible. Heart, mind, self. Mysteriously connected one to another. I can’t do this.

It is impossible, I’m alone.

And so I call on Him with Whom all things are possible, “He who made them at the beginning, who made them male and female, He is mighty to save!”

You are my impossible, and I am cold and miserable.

But I am not convinced.