Update 2016-12-10: The BMW M4 DTM 2016 at the Red Bull Ring Spielburg is an excellent demonstration of what the AccuForce should feel like in more games. SimXperience worked with S3 on the FFB feel for the November 2016 R3E update and, combined with DTM 2016 using the latest game physics, it produces an intense, visceral driving experience I had not yet experienced with the AccuForce since I bought it in early-mid 2015. I am very pleased, needless to say, after all my tweaking. Here’s the settings, and, personally, in SimCommander I always reset my AccuForce to defaults, set Wheel Mode High, enable Force Boost, and disable Engine RPMs:

Update 2016-11-16: I’ve been tuning FFB from the ground up for AF after the November 2016 update released yesterday. I feel I landed on pretty much the same as the 2016-11-14 update. The only drawback so far is a lighter wheel around center especially on straights. For the gory details of how I got to my settings, here’s the post that I made in the SimXperience Owners Club forums. Here’s the settings screensnaps:

Update 2016-11-14: Just before the November 2016 R3E update, I was playing around with Dynamic Oscillation Control – Moving instead of Dampening in SimCommander and, with a little bit of friction, I quite enjoyed the results not having to put up with the side-effects of fluid dampening on handling behaviour. I even set some RaceRoom Raceway #1 finishes! :) I’ll be updating for the November 2016 R3E update, shortly, but for now here’s the settings:

Update 2016-09-27: Been playing around with FFB to reduce ‘boat sway’ on straights. I’ve been experimenting with more dampening and even had to add some spring (ugh). I also clued in to the in-game FFB settings where Steering Force Intensity is the magnitude of strength for all the settings in that section (it strengthens or weakens the sum of all other forces in that section), and I also realized the Vertical Load and Lateral Load really need to fit in 100% (ie. one can be 75% but the other must be 25%). Here’s the settings:

Update 2016-01-12: Renamed Wishlist to Suggestions for Improvements and added a number of items.

Update 2015-06-04: Check out this post by Georg Ortner of S3 that explains the different FFB options.

Update 2015-04-15: Ugh. Okay they deleted that thead. It’s still a good thread for getting an idea of what other people are doing, however. Here’s the gist: He has disabled Spring Effect, Damper Effect, and Centering Spring and I don’t modify anything else in-game or in files yet. I had these at defaults, due to my assumptions about some his previous posts over at the RaceDepartment.com forums, but I think these are better settings for the G27 now. I think the ffb center deadzone issue is a little bit better like this. I still feel no need to modify any files. My in-game settings are also pretty normal still. I think this is a net win so it’s worth a try.

Update 2015-03-31: Sector 3 released another update today. It will make you reconfigure your controllers (which isn’t such a bad thing since ffb is always being updated, just wish they had saner defaults). Watch out for the need for ‘inverted forces’ that some wheels, like the G27, need. I left pretty much most things at default. Among the changes were “3 new FFB multipliers for spring, damper and friction in FFB settings.” Spring is the one we’re interested in for dealing with the G27 center deadzone issue which still exists. I did a binary search from 0% to 100% to 50% to 25% and ended up at 25%. At each level I tried to determine whether hard cornering was ‘clipping’ (overdriving the wheel motors so no nuanced forces could be felt) and felt that 25% allowed me to feel the road through hard steering but, unfortunately, that means the deadzone is still there.

Update 2015-02-13: Sector 3 pushed another release yesterday. I’m using all FFB defaults and finding tweaking isn’t very rewarding in R3E with a G27, unfortunately. Center deadzone is still there. Great game, though, and I play it regardless of the FFB troubles. After seeing all the cars, tracks, audio, single player, multiplayer, experiences, championships, hill climbs, etc., I have to say I don’t think any other sim right now comes close to the complete package R3E delivers. Well done, S3!

Update 2014-11-18 – 2: Maybe I’m just getting used to the FFB but perhaps there has been a slight improvement in the G27 ffb center deadzone with the latest update although it’s not nearly enough. As well, the AI respect/aggression appears to have been improved. I can occasionally run side-by-side with AI now without getting rubbed off the track and AI are no longer ramming me from behind going into corners so much.

Update 2014-11-18: Sector 3 has released another major update today including the DTM Experience 2014 amongst various other improvements. Once again I’ve deleted my controller profile in-game to ensure I’ve got their latest controller changes in and I’ve reapplied my changes.  Surprisingly I don’t yet feel a need to change any of my profiler or in-game settings that I had with the previous October update. This is unfortunate as it means Sector 3 didn’t address G27 ffb center deadzone issues. They also haven’t improved AI respect/aggression which I was hoping for. That’s not to say this isn’t a great addition, though, as they’ve made a tonne of improvements to track and cars and released new content all besides DTM-E 2014. There’s even a free real-world track now for RaceRoom drivers: Portimao. Keep up the good work S3!

Update 2014-10-18 – 2: I’ve updated my ffb settings for the game update released on 2014-10-17. I started a new controller profile in-game. This resets the controller RCS file and apparently the latest update came with some significant changes that caused all my settings to act strange so I’ve redone everything. The good news is I’m not editing the RCS file anymore. All my changes are in the Logitech Profiler and in-game. 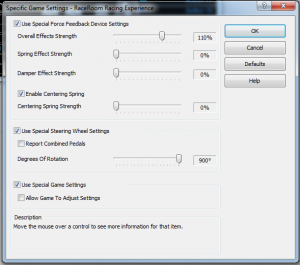 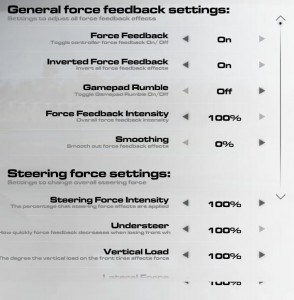 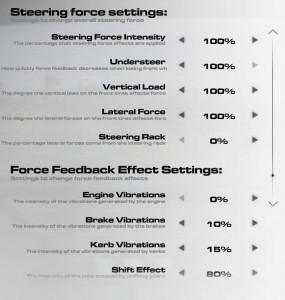 Update 2014-10-18: Sector 3 released an update for RaceRoom Racing Experience yesterday and it came with some force feedback changes that really messed with my G27 wheel settings. It felt very, very light. I suspect this was due to game changes under the hood concerning the “FFB steer force front grip exponent” and “FFB steer force rear grip exponent” RCS file settings that I had heavily modified (see 2014-09-20 update below). If you’ve done this and are experiencing ffb settings try restore the original copy of your RCS file. I did and the wheel came back to normal in-game. Unfortunately the ‘road feel’ felt a little duller than it did before. I upped Vertical/Lateral forces from 160 to 200 and it was a tiny bit better but not enough. Back to the drawing board… :(

Update 2014-09-22: I’ve been experimenting again trying to get as much information of the wheel as possible even in ‘high force’ situations like hard cornering where the force output from the game is much more than the wheel can handle and ultimately drowns out the fine detail. My new Controller RCS file (see below) settings are: FFB steer update thresh=”0.0015″ (1/10th the original; not really sure if this actually helps). In-game settings: Vertical Load: 160%; Lateral Force: 160%. Some cars with heavier steering (Eg. BMW Z4 GT3) still max out the forces by quite a bit and all you get a simple, strong linear steering force. Not much use when you need to feel your way around a corner. If you’re experimenting on your own try to see, during the apex of sharp corners, if you can feel subtle tire force variations. If you can highlight those forces then you’re providing yourself with information about the contouring of the road, understeer and oversteer, etc. All things you need to know to tell how your car is handling. Right now it’s still unsatisfactory but it’s better than it was.

Update 2014-09-20 – 2: I compared brake sensitivity with iRacing. For linear brake springs iRacing uses a default 1.8 brake factor (~25% at half way brake travel) and this roughly equates to 0% in SimBin/S3 titles. I’m used to iRacing brakes on a linear spring so I setup mine in R3E at 0%.

Update 2014-09-20: A post over at RaceDepartment.com for DFGT FFB settings works quite well for G27s. His changes come down to editing your controller rcs file (see below for comments about that): FFB steer force output max=”1.2″;
FFB steer force grip weight=”0.8″; FFB steer force front grip exponent=”8.0″; FFB steer force rear grip exponent=”2.0″; FFB steer load multiplier=”1.85″;  FFB steer lateral multiplier=”1.1″; FFB steer rack factor=”0.55″. It works quite well and I can finally feel cornering forces although the ffb gets drowned out around most serious corners. The really drastic change is that 8.8 for “front grip exponent”. By default it’s 0.25 so it must really be helping. My only real problem is that this reintroduces the G27 ffb center deadzone issue as not enough forces are applied to keep the wheel fully centered. This means your Vertical Load setting is largely nullified on straights. Another poster recommends upping your Logitech Profiler Overall Effects Strength to 107%.  I tried it. It drowned out other ffb effects.

Update 2014-09-17 – 3: I have been reading through the FFB Guide mentioned below. While steps are provided to go from baseline force feedback and gradually tune in more and different forces, which all sounds great, sadly the very first steps are what I still feel is lacking in R3E’s force feedback on the G27. It feels as though too much force is being applied to the wheel during ‘heavy’ steering / maneuvers and there’s no forces left to play with for other effects such as vertical load, lateral forces, understeer, even shift effect. Maybe S3 will fix it but, unfortunately, they don’t really have a track record of delivering on those kinds of things. Still, one can always hope!

Update 2014-09-17: To disable Brake Vibration while S3 fixes the bug about that not being able to be changed in game edit your Documents\My Games\SimBin\RaceRoom Racing Experience\UserData\ControlSet\Logitech G27 Paddle Shift Custom.rcs file (your file name might not be the same) and set: FFB brake vibe freq mult=”0.0″ // Scales actual brake rotational frequency to force feedback vibration frequency. The default is 6.0. Make a backup of your file so you can recover when S3 actually fixes the bug. Note you may still experience similar ffb braking into certain corners but I’m pretty sure that disabled the brake vibe for me.

Sector 3 Studios (formerly SimBin) have recently released an update to their sim racer RaceRoom Racing Experience which includes, among other things, much improved feedback. I wrote a post over at RaceDepartment.com detailing my Logitech G27 setup, thus far, for what I feel is giving me the most information out the wheel that I can get right now. That post wasn’t stickied so I’ll reproduce it here in case it gets lost. I hope to update this post in the future as Sector 3 updates their game and I test out new force feedback settings. My primary force feedback goal is more information even at the cost of force strength. It’s amazing how much information iRacing has been able to squeeze into a G27. That’s my gold standard right now.

Also, in another RaceDeparment.com thread a forum member reminded us of an old FFB Guide (backup link) for SimBin titles based on, what I believe is, the underpinning rFactor force feedback configuration file settings including detail on how to use them – something that’s really missing in the actual configuration files. I’m not sure how old it is but since rFactor is still at heart of Sector 3’s RaceRoom Racing Experience it should still be valuable.

The rest of my post will reproduce the post, with some edits, I mentioned above about my current RaceRoom Racing Experience force feedback setting so far…